The Malaysia World Band Competition 2013 is the third edition for Malaysia since its inception in 2009. This year’s event will feature world class bands performing in Kuala Lumpur beginning 03 – 07 July 2013 highlighting 15-time World Champions, The Blue Devils from the USA. Over 1500 participating band members of more than 20 bands from all across Asia will display their colourful showmanship and musical performances through series of events and competitions during the period.


The Malaysia WBC is recognized globally as one of Asia’s leading band competitions which attracts some of the world’s finest marching and show bands to compete for the coveted WBC Champion title. Sanctioned by both the Malaysian Band Association (PPM) and Drum Corps Europe and endorsed by Drum Corps International, the Malaysia WBC will also see international standards of judging system modelled from European standards. With a pool of accredited and experienced judges, the Malaysia WBC will see best of the best performance to musically dazzle the crowd to their feet in winning the hearts of the judges.

As an appetizer of the week-long event, the Malaysia WBC 2013 Official Opening Ceremony and Street Parade being the first event of the competition will enthral Malaysians alike with the marching techniques combined with colourful display performances as teams march past by the judges to introduce themselves as a participant in this year’s competition right in the heart of Kuala Lumpur at Dataran Merdeka. Don’t forget to join us on 3 July 2013 from 8.00pm onwards!

This year’s Malaysia WBC Drum Battle Competition will see participating teams facing a hard time as they will be facing 15-time World Champions, The Blue Devils All Star Drumline. Nevertheless expect amazing performances by percussionists and drummers in this round of the competition and the top 2 finalists will see each other at the Grand Finals. The event starts from 8.00am onwards, on 4 July 2013, at the Kuala Lumpur Hockey Stadium in Pantai Dalam.

This will act as a preliminary round for international participating bands before facing off in a heated finale during the Grand Finals before being crowned World Champions. Held at the Pantai Dalam Hockey Stadium on 5 July 2013, audience shall expect never-before-seen performances from international bands combining great techniques from colorguards to brass and percussions. Event begins at 8.00pm.

The long-awaited Malaysia WBC 2013 Grand Finals will be the highlight of the week-long event seeing the finalists eyeing for the coveted WBC Champion title showcasing their powerful showmanship and abilities while entertaining audience and yet at the same time capturing the heart of the judges. The National Hockey Stadium in Bukit Jalil will be the place to be at on 7 July 2013 to witness the most exciting Malaysia World Band Competition ever being held. 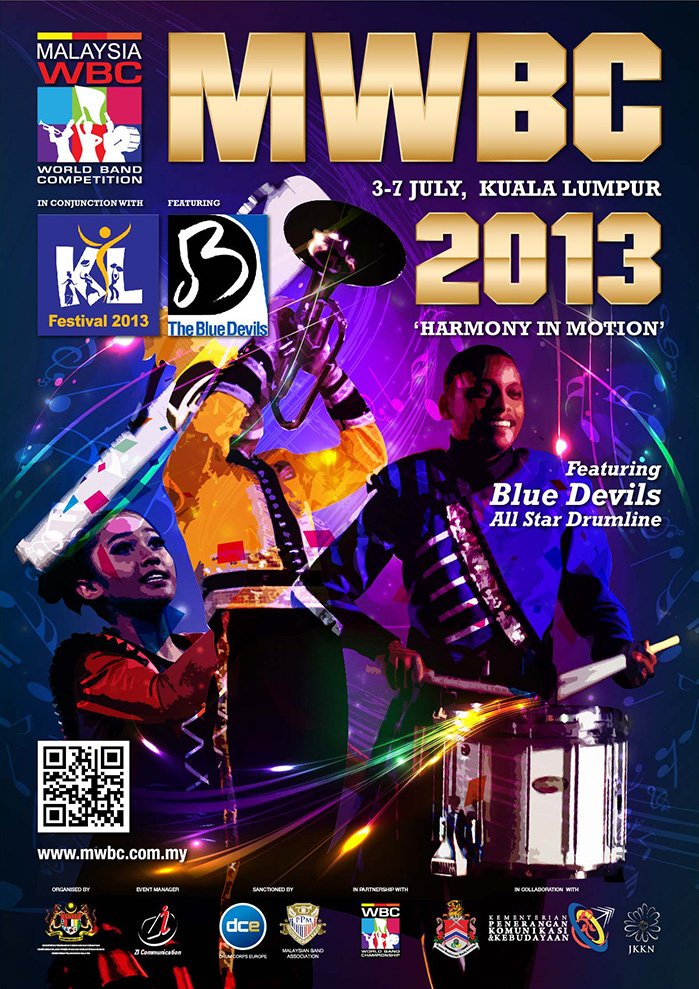